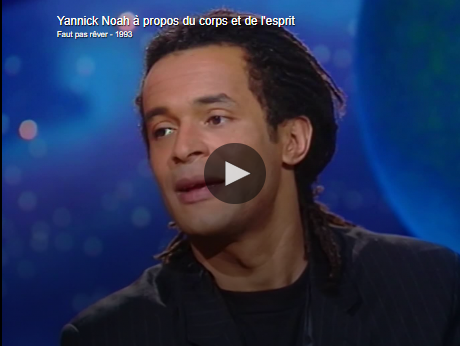 Yannick Noah is one of those celebrities convinced by the interest of sophrology. The tennis player discovered the method at the end of his sporting career, and drew many benefits from it. Find out what he says in interviews, some dated 1993.

Yannick Noah, this great sportsman and singer who remained for a long time the favorite personality of the French, practice for many years the relaxation therapy. The method helped him a lot when he was tennis, since it was thanks to her that he realized his mental sports preparation. In particular, it allowed him to channel his energy and multiply his performance on the ground. Profits he talks about in two interviews, one given to Clés magazine, the other in the 1993 show Pas pas dream.

“At the end of my career, I practiced relaxation therapy. It really interested me. In fact, it started out in an accident that caused knee problems, and that I was trying to treat with traditional methods. (…) I had been told about yoga but I felt I knew myself enough. It was a little silly. By discovering the relaxation therapy, I learned a lot about myself, how I was on the course, and then of course it spilled over into my personal life. But at the start, the results on the course were really obvious. The experience consisted in learning to relax, to find oneself in a situation. I had images in my head. Media things related to a sense of injustice. I often used to have the public with me, and when I felt hostile, I didn’t feel good. Or a referee foul, or playing against someone I love or against someone I hate. Each time I couldn’t play fully, give the best of myself. However, when I was in this state of relaxation – without any external pressure – I internalized these images. I had a physical reaction which was terrible. I was suddenly very, very heavy, I started to have colors on the back, knees … Thanks to sophrology, I learned to find lightness, clarity in the head and in the body. It happens in seconds. Then, we anticipate what will happen on the course. “…

Interview taken from the article Being yourself against all odds.

Sophrology, a tool to better live the menopause!

develop your well-being through positive thinking!

sophrology takes care of your spine!

You can find out more about which cookies we are using or switch them off in setting Setting.

This website uses cookies so that we can provide you with the best user experience possible. Cookie information is stored in your browser and performs functions such as recognising you when you return to our website and helping our team to understand which sections of the website you find most interesting and useful.